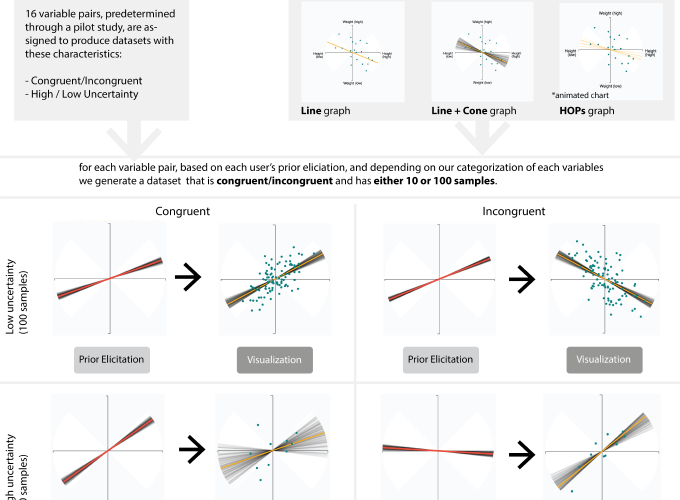 Understanding correlation judgement is important to designing effective visualizations of bivariate data. Prior work on correlation perception has not considered how factors including prior beliefs and uncertainty representation impact such judgements. The present work focuses on the impact of uncertainty communication when judging bivariate visualizations. Specifically, we model how users update their beliefs about variable relationships after seeing a scatterplot with and without uncertainty representation. To model and evaluate the belief updating, we present three studies. Study 1 focuses on a proposed Line + Cone visual elicitation method for capturing users’ beliefs in an accurate and intuitive fashion. The findings reveal that our proposed method of belief solicitation reduces complexity and accurately captures the users’ uncertainty about a range of bivariate relationships. Study 2 leverages the Line + Cone elicitation method to measure belief updating on the relationship between different sets of variables when seeing correlation visualization with and without uncertainty representation. We compare changes in users beliefs to the predictions of Bayesian cognitive models which provide normative benchmarks for how users should update their prior beliefs about a relationship in light of observed data. The findings from Study 2 revealed that one of the visualization conditions with uncertainty communication led to users being slightly more confident about their judgement compared to visualization without uncertainty information. Study 3 builds on findings from Study 2 and explores differences in belief update when the bivariate visualization is congruent or incongruent with users’ prior belief. Our results highlight the effects of incorporating uncertainty representation, and the potential of measuring belief updating on correlation judgement with Bayesian cognitive models.